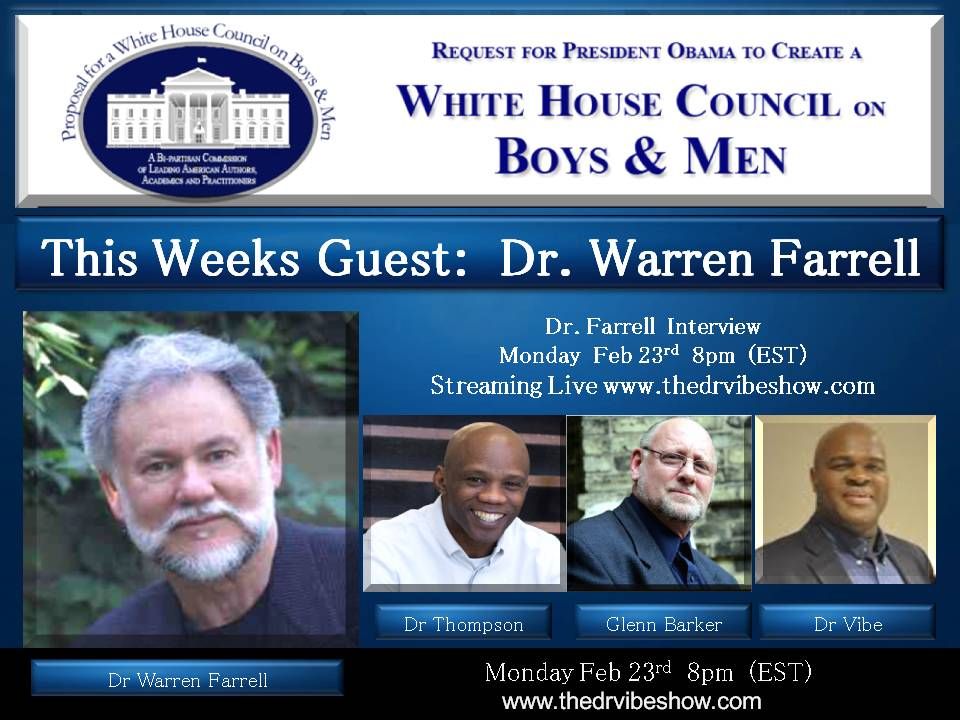 Dr. Warren Farrell, the Vice President of CIW for Gender Issues, is the author of books published in 17 languages, including international best-sellers The Myth of Male Power and Why [...] [Read More ...]

Warren Farrell on The Oprah Winfrey Show: Why Men Are the Way They Are

Watch the start of Dr. Warren Farrell's educational conversation on Why Men Are the Way They Are on The Oprah Winfrey Show: How divorce hurts as shared by an Oprah audience [...] [Read More ...]

This remarkable video from the Integral Spiritual Experience 2 shows Warren Farrell explaining what moved us into our present cultural state of seeing males as disposable and offers a number [...] [Read More ...]

“Our Vision is the Evolution of Masculine Consciousness from Human Doing to Human Being” – Warren Farrell, Vice President/Gender, CIW

We would like to introduce you to what we think is an important step forward in the evolution of human awareness and compassion. It’s a group that has proposed a White House Council on Boys and Men to President Obama. Headed by Warren Farrell the group has written a proposal that outlines the many reasons why this Council is needed.

Dr. Warren Farrell, the Vice President of CIW for Gender Issues, is the author of books published in 17 languages, including international best-sellers The Myth of Male Power and Why Men Are the Way they Are. Farrell, Ken Wilber and Marc Gafni have done numerous interviews together.  Farrell, Gafni and John Gray are co-authoring Beyond Mars and Venus. Dr. Farrell’s popular and profound talk Why Love is Such a Mess, delivered at the Integral Spiritual Experience 2, shows how the real transition to gender liberation is the transition from Stage I survival to Stage II discovery of fulfillment—fulfillment that neither sex had in the past.

Dr. Farrell then organized a multi-partisan coalition of about three dozen of the nation’s leading authors, therapists and practitioners of boys and men’s issues.

The commission is working to bring a group of boys, girls, men and women to Iowa and New Hampshire. The hope is to personally tell the legislators about the hardships that are being faced. We need your help to make this happen.

The coalition worked for 18 months to identify five areas where boys and men are in crisis:

They identified causes and solutions.

A one-pager, executive summary and the full proposal are here.

Why Do We Need a White House Council for Boys and Men?

>> Read Warren Farrell’s newest book The Boy Crisis: What’s Happening to Our Boys and What We Can Do About It <<

Copyright © 2022 by Center for Integral Wisdom . powered by enfusionize™